The Results of Our Surgical Smoke Plume Survey Are Now Available 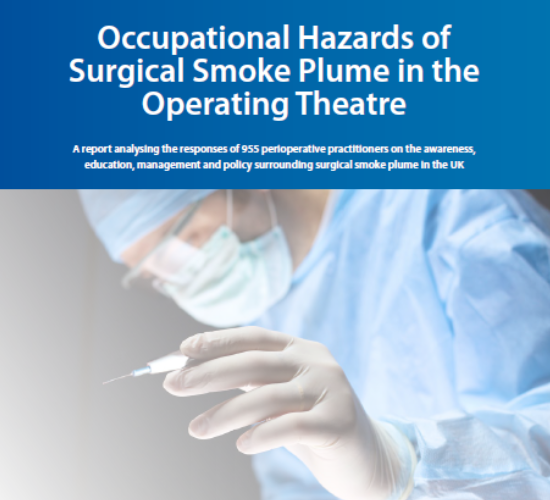 Perioperative practitioners in the UK are universally concerned about the risk surgical smoke plume poses to their health. Yet less than a fifth are aware of any policy being in place to manage this risk within their organisation. The majority of hospitals have plume evacuation equipment in place, but it is only used in the minority of surgical procedures. Almost three-quarters of theatre staff have experienced symptoms associated with exposure to surgical smoke plume. But these symptoms are rarely reported and, when they are, no action is generally taken.

These are the findings of a new report ‘The Occupational Hazards of Surgical Smoke Plume in the Operating Theatre’ published by the Surgical Plume Alliance (SPA), a joint advocacy initiative between the Association for Perioperative Practice (AfPP) and the International Council on Surgical Plume (ICSP). They aimed to gain a greater understanding of the awareness levels, training, management and policy surrounding surgical smoke plume in the UK.

Some key findings from the report include:

·Demand for a recognised, national training programme. 52% of perioperative practitioners have not received any education on the hazards of exposure to surgical smoke plume. However, 96% would attend training if it were made available.

·National guidance is needed to mandate the use of evacuation equipment during surgical procedures where surgical smoke plume is generated. 77% of perioperative practitioners do not have evacuation devices available in all operating theatres and procedure rooms at their workplaces. Only 14% said plume evacuation equipment is always used during laparoscopy / endoscopy procedures, where surgical smoke plume is readily generated and can be a hazard to patients as well as staff.

·Consistent, accurate reporting mechanisms are required to allow staff to report negative health symptoms. 72% of perioperative practitioners have experienced symptoms associated with exposure to surgical smoke plume. Only 12% reported these symptoms and, in 77% of cases, no follow-up action was taken.

“This report provides evidence of what we’ve spoken out about for years. Exposure to surgical smoke plume is one of the most overlooked hazards in the operating theatre.

“We knew anecdotally that theatre staff continue to be concerned about this issue, that there was a lack of formalised training and policy, and that plume evacuation equipment was often available but in insufficient quantities and used infrequently. These findings provide the first-hand data to support that.

“We can now use that data to drive action and change. Along with the report, SPA published a position statement on the perioperative management of surgical smoke plume. This outlines our recommendations to minimise the risks, ensure a safe treatment environment for patients, and provide a safe and healthy workplace for the perioperative team.”

The full report and position statement are available to download at the end of this article.

For anyone who is interested in learning more about the risks of surgical smoke plume, and how to manage them, Penny Smalley, Report Co-author and Director of Education and Regulatory affairs at the International Council on Surgical Plume (ICSP), is delivering a session on the topic at the AfPP Annual Conference 2022. The hybrid Conference takes place virtually and at the University of York on 8 – 11 September 2022. Tickets are available from afppconf2022.co.uk.

We'd like to thank everyone who took the time to complete the survey that led to this report.